As we pre-record our Saturday broadcast with Jon Carney from La Flor Dominicana I am going to attempt to do my first ever live blogging cigar review. Today’s cigar is the new 1994 from Litto Gomez’ La Flor Dominicana… The cigar comes in 4 sizes and has a wrapper from San Andreas with binder and filler from the Dominican Republic.

The Look: An oily looking wrapper from San Andreas in Mexico adorns the cigar and it is glistening with an exorbitant amount of oils. The cigar features the new La Flor Dominican logo and denotes La Flor Dominicana 1994. The cigar represents the 20th Anniversary of this company which has farms in the Dominican Republic and offices in Coral Gables a section of Miami, Florida. In the hand the cigar has a nice feel to it, and the foot is well packed with a nice swirl of ligero tobacco in the center.

The Notes: The cold draw of the La Flor Dominican 1994 has a mineral taste to it, with some earthy notes. An interesting combination once you take into consideration that the foot has a nice heavy molasses to it. On the initial draw of the cigar there are some incredibly tasty notes of citrus with some faint sweetness in the background.

As we smoke the first third the cigar there are some delicious notes of citrus, chocolate and some molasses as an afterthought on the finish of the smoke. The one thing that I am really noting how medium bodied this cigar is the in comparison to other cigars such as the Ligero and Double Ligero. As the first third of the cigar comes to a close the molasses really begins to stand out and a sweetness becomes the focal point with some citrus remaining on the finish.

As we breach the second of the cigar the orange peel notes really pull you into the elegance of this cigar that takes, in my opinion La Flor Dominicana to the next level.  As the La Flor Dominicana 1994 enters the half way point a chocolate note begins to develop on the front end and the citrus experienced earlier fades away.

The last third of the cigar has some growing spice through the nose and there is a growing profile of a heavy earth note. Different from the sweetness experience in the first third, but there is just enough remaining in the background that makes the transition a smooth enjoyable one. On the finish is a nice lingering dark chocolate note that really brings this cigar home.

The Burn: The draw of the cigar has just enough of a resistance on the draw to keep it burning slow. The ash of the cigar has a dark brindle look to it with a medium to dark gray. I smoked the cigar with a fan blowing at me while we taped the The Cigar Authority and despite this the burn was great and only the slightest bit wave on the burn line which features a thin carbon line. 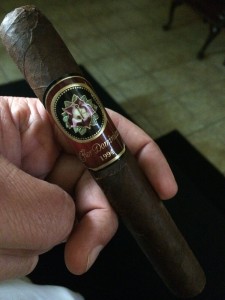