Ahead of this year’s IPCPR show, Altadis U.S.A. is unveiling updates and introductions that will be showcased at the trade show.

Leading the way are two Nicaraguan offerings from the Montecristo and Romeo y Julieta 1875 lines.

Following the success of the H. Upmann by AJ Fernandez, Altadis will debut H. Upmann Connecticut, in collaboration with the Grupo de Maestros. Rounding out the introductions, will be an Aging Room Quattro Connecticut and Nicaragua selection. Other releases include the next iterations of past limited editions from Montecristo, Artisan Batch Series III and the Grupo de Maestros Private Batch IV.

H. Upmann Connecticut is a cigar that challenges the characteristics of a traditional Connecticut cigar – a complex, robust Connecticut that breaks the mold of the creamy Connecticut blend and continues the bold offering brought to life by the H. Upmann Nicaragua by AJ Fernandez. H. Upmann Connecticut was conceived by Rafael Nodal and The Grupo de Maestros, and features carefully selected tobaccos, which are rolled at the Tabacalera de Garcia factory in La Romana, Dominican Republic. H. Upmann Connecticut pays tribute to the upcoming 175th Anniversary of the brand in 2019.

For years the brotherhood of the Grupo de Maestros, the master blenders and cigar makers, have been making their own private blend of Montecristo cigars from a special combination of tobacco. Now, once again, these cigars are available to you, but only in extremely limited quantities. Combined, the Grupo de Maestros have over 200 years of cigar-making experience and have united to create a rarified experience for cigar enthusiasts worldwide. These rare cigars are specially made with their own certificate of authenticity.  After aging, the cedar shelves were taken down and made into trunk boxes, while preserving the natural wear, giving each box its unique character.

Introducing the Montecristo Artisan Batch III, the third iteration in a series of limited edition cigars born from a private batch of our most precious tobacco.  Every leaf is delicately and carefully handpicked by just three of our Grupo de Maestros, who in turn, have handpicked an accomplished buncher and master roller to personally handcraft our entire collection. These collectible cigars are among our most highly coveted for their unique consistency in delivering a medium to full-bodied experience with coffee, creamy, earthy notes and of course, unprecedented artistry.

Aging Room Quattro is the pinnacle and highest acclaimed brand in the Aging Room portfolio, rated 95 and ranked #2 cigar of the year by Cigar Aficionado in 2013! The QuattroF55 has been named Quattro original, with F55M becoming Quattro Maduro. Expanding the range also features a Connecticut and Nicaraguan wrapper, offering a total of four outstanding varieties, positioned as a boutique cigar brand with traditional Cuban roots. 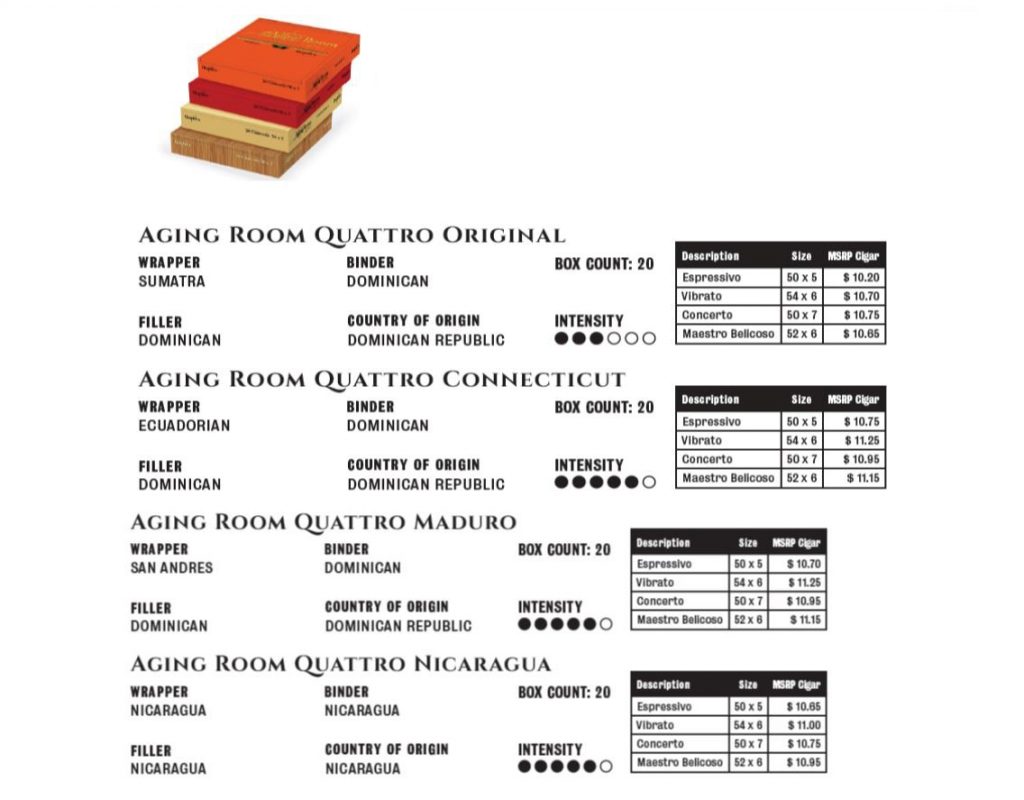