J&J Spirits, the company behind the popular Single Cask Nation Whisky, announced the release of a rye cask aged premium cigar in collaboration with Aganorsa Leaf. The cigars themselves, Robusto in size measuring 5 1/4” x 50, are comprised of Habano Ecuador wrapper and Nicaraguan filler and binder. J&J Spirits brand owner of Single Cask Nation- an independent bottler of fine Single Malts, Bourbons, Ryes, Rums and Mezcal, shipped a single rye cask to Aganorsa Leaf. This allowed the cigar producer to age the cigars for a period in the cask, imparting subtle sweet and delicate spicy whisky-driven notes to the cigar smoking experience.

The cold draw allows notes of vanilla and sweetness from the barrel. It’s different than the sweetness you normally get from the Habano wrapper. Once lit, the sweetness dies down and you delve into a typical Aganorsa profile cigar- spicy deliciousness, however tempered because of the barrel aging. The barrel changes the experience from typical Aganorsa profile and its one of a kind and a first for the them. “The cigar looks and feels velvety smooth,” said Jonathan Miller, Cigar Czar at J&J Spirits.

“Having just dumped a cask of rye whisky,” added Joshua Hatton, the company’s President & CEO, “which was then married with some bourbon to create our penultimate Whisky Jewbilee festival bottling, we nosed the empty cask itself and realized that what we were smelling would go really well with a nice, light-to-medium bodied cigar. Our first thought that came to mind was, “who could we partner up with for tobacco and how could we sell the final product?’”

Partnership with Aganorsa Leaf & 2GuysCigars.com.
Enter Jonathan Miller, the company’s Cigar Czar. Hatton continued, “with Jonathan’s deep connection within the cigar world we knew he’d put us on to just the right producer and retailer.”

“Aganorsa Leaf produces some of my favorite sticks,” said Miller, “and when it came to include 2GuysCigars.com as a retail partner, well, I couldn’t think of a someone better to work with.”

2GuysCigars.com was keen to work with Single Cask Nation and Aganorsa Leaf for this very special and unique release of cigars.

Availability
With a total of only 200 boxes (10pk) produced availability will be limited. Cigars will be available exclusively at 2GuysCigars.com for $119.99 and will launch at 12 Noon on Wednesday, November 13.

All members of Single Cask Nation will have 24 hours early access to the cigars beginning at Noon on Tuesday November 12th. Membership to Single Cask Nation is free and is easy to sign up for by visiting: https://singlecasknation.com/account/register

Founded in 2011, Single Cask Nation is dedicated to uncovering and bottling the absolute best casks from Scotland, America, and beyond. All Single Cask Nation bottlings are bottled as single cask and at full cask strength. Bottled for whisky geeks by whisky geeks. Single Cask Nation whiskies, rums, and mezcals are available in more than 25 states in the US, they also feature 10 online exclusive bottlings per year. The company also has one of the nation’s leading industry-insiders whisky podcasts called “One Nation Under Whisky.” This podcast can be found on any and all podcast apps, Spotify, and smart speakers. 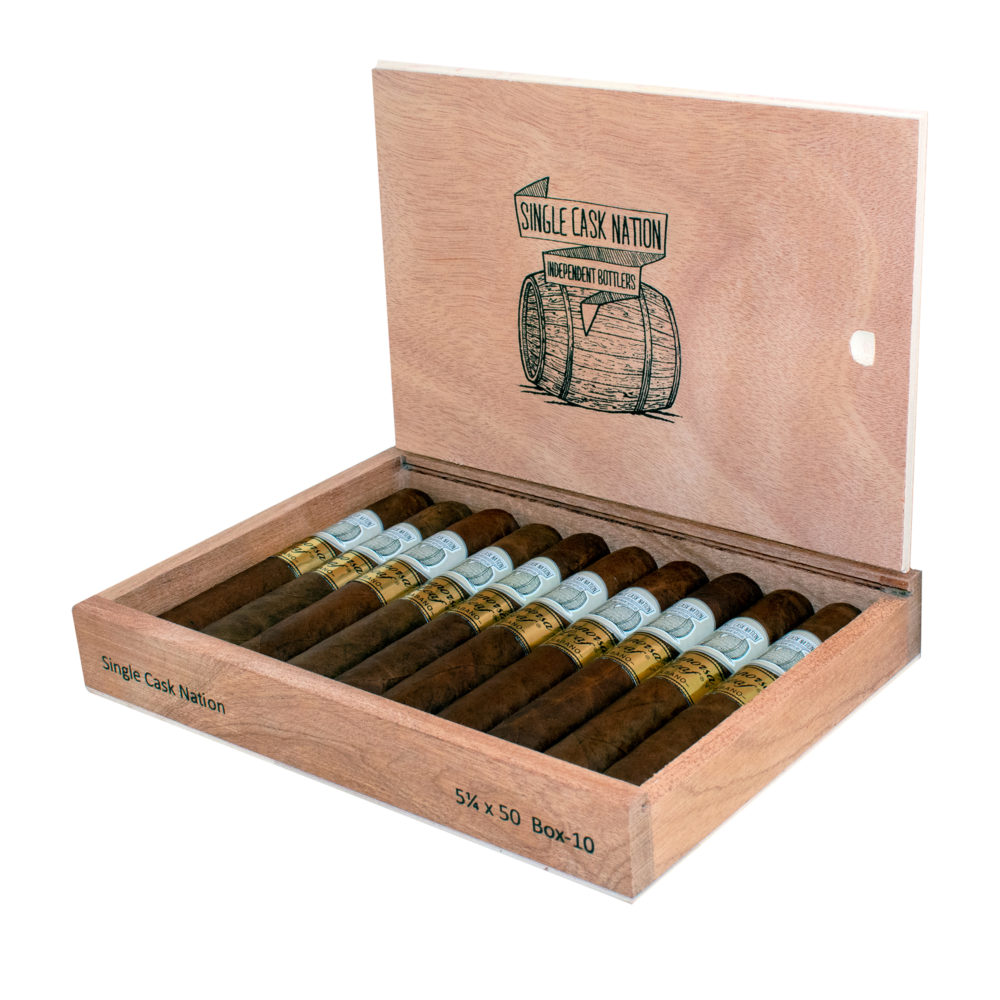